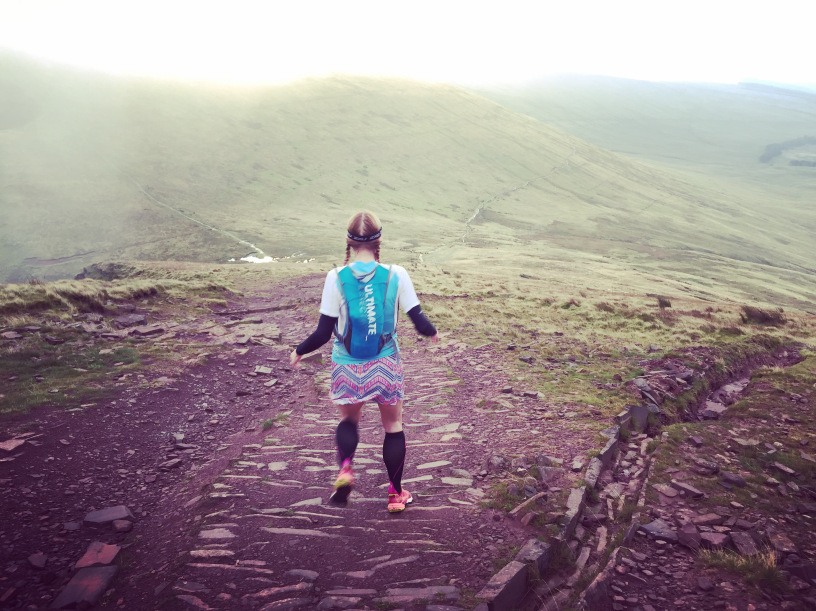 If I’m being honest my immediate reaction when Tom and I were successful in the CCC ballot was one of a teeny bit of disappointment. Tom really wanted to run the CCC but I was a bit more indifferent as I didn’t think the nature of the race would really suit me. Also, a few weeks earlier we’d been successful in the ballot for Berlin marathon and I’d have preferred to spend the summer marathon training to try and get my marathon PB down. So for a split second I did consider not taking up my CCC place and just going over to Chamonix to support Tom, but I realised there would be absolutely NO WAY I could be in Chamonix during UTMB week and not race, so I decided my mission for the summer of 2017 would be to try and turn Sarah Sawyer, a self-confessed fairy who likes nice runnable trails like the South Downs and doesn’t live anywhere near any mountains, into the best I could be in the CCC.

As you’d expect with a race that has 21,000 feet of ascent over 62 miles, hills need to form a fundamental part of your training. However, the nice gentle rolling hills of the South Downs, my normal training playground, are pretty redundant for CCC training. To put it into some context, I normally work to an average of about 100 feet of ascent per mile over the South Downs, whereas the CCC will average at over 300 feet per mile. It’s also the nature of the climbs in the CCC; some will go on for 2+ hours. However you have to work with what you’ve got, so hill reps became my best friend. Instead of a morning 10 mile run on the Downs, I replaced this with 7 or 8 Devils Dyke hill reps – each rep was 0.5 miles and 300 feet of ascent, so in just a 7 mile run I could accumulate over 2,100 feet of ascent, double what I’d normally see on a 10 mile Downs run.

I also mixed these up with Beeding/Truleigh hill reps (1.8 miles/600 feet ascent) and Newtimber hill reps (0.5 mile/150 feet ascent) – basically name me a hill on the South Downs and I can tell you its length and ascent!

I also moved all my easy and recovery runs onto the Downs, although the nature of the hills don’t replicate the Alps, it was still getting more ascent/descent in my legs each week.

There’s obviously no substitute for getting out into the mountains so we went over to the Alps and spent three days running the CCC route (a full write-up is here) which was undoubtedly the best thing I did to get first-hand experience of the course and terrain. However, closer to home we spent three weekends in our campervan in the Brecon Beacons and then Snowdonia. Although the climbs still don’t replicate what’s in the CCC; by doing reps of Pen y Fan and Snowdon, I was able to rack up some good ascent/descent on more mountainous terrain. I’ve always been pretty strong on uphills as I’ve done a lot of high altitude trekking in the past, but my weakness is the more technical descending where my technique is akin to a drunken flailing fairy at times…however, I have noticed gradual improvements from spending time in the Alps and Wales, so hopefully I’ll be slightly less of a teetering fairy on race day!

However, if you can’t get to the mountains, you can in effect bring the mountains to you. One weekend I managed to rack up nearly 8,500 feet over a 26 mile run on the South Downs, so it is possible to get some good elevation away from the mountains (as long as you do not mind doing a LOT of hill repeats!).

In addition, shorter hill reps and speedwork still played a fundamental part in my training as I knew I’d need that anaerobic fitness to push hard on the climbs.

I’m a huge advocate of cross-training and always do several types of Pilates and yoga classes a week, and really focused on core, ankle and quad strength as I knew I’d need these more than ever in the Alps. In addition, specific to the CCC, I added two new types of cross-training. Firstly, as I will be using poles in the race, I used the ski machine in the gym for upper body strength to work the same muscles I’ll be using with the poles. And then secondly, I started doing daily weighted rucksack hikes of about 2 miles – this basically involved me loading up my rucksack with 6kg of chickpeas and hiking purposefully around the hilliest streets of Brighton (trying to avoid bumping into anyone I know and having to explain what I’m doing!). The benefits of the hikes were to introduce a low impact way of building leg strength for the hills.

As you’d expect for a mountain race there’s a comprehensive mandatory kit list. A few points on some of my kit choices:

– I’ll be using the Ultimate Direction AK 12l rucksack – I normally use a smaller pack (Salomon S-lab 5l or Ultimate Direction SJ 7l), however the recce demonstrated to me that I’d prefer the flexibility of a bit bigger pack so I can carry extra water if it’s hot and any extra layers if the forecast is bad. Also there’s no drop bags and I’ve been warned about the ‘food police’ at aid stations so I want to make sure I’ve got sufficient food with me. I sometimes struggle with eating in races as I lose my appetite, but I’ve found with the slower pace you move in the mountains I’m wanting to eat a lot more, so I’ll be taking my tried and tested favourites of Mountain Fuel, GU waffles, ZipVit bars and Clif Bloks to supplement what is available at the aid stations.

– Trainer-wise I’ll be wearing La Sportiva Akasha – trainers are a very personal choice but for me they are the perfect mountain running shoe; light but with plenty of cushioning and protection.

– The majority of runners, including elites, in mountain races such as the CCC use poles, and I’ll be using Mountain King Trail Blaze poles. If the likes of Kilian use poles (and he seems to know what he’s doing in the mountains!), then I figured I’d be a bit of an idiot not to use them! Before my recce I thought I’d use the poles sporadically throughout the race, but the recce demonstrated that they’ll be used a LOT, so I won’t bother collapsing them inbetween climbs or tricky descents and will run with them, which I’ve been practicing a lot with, and is actually easier and more comfortable than you’d think.

The bulk of my training is done now and I’ve now got a 11 day taper ahead of race day. Although I’m running the CCC mainly for the experience, I’ve got a race plan and a time that I’d like to arrive in Chamonix. However, I’m well aware a race of this nature is massively dependent on conditions, and rain and snow or excessive heat could slow me down considerably so I’m not getting too focused on times until the race and ultimately just want to enjoy the day. In a way regardless of my finish time, I’ve absolutely loved every minute of training; even if I never run another mountain race again I’ve learnt things that have definitely benefited my wider running; and it’s demonstrated that whilst I’ll never be a mountain goat, I can be a bit less of a fairy when I need to be!

Sarah Sawyer
I’m Sarah, a Pilates teacher and Running Coach from Brighton, England. I run everything from parkrun to 100+ mile ultra marathons, and everything in-between. I run on trails, in the mountains, across deserts, on roads and around the track….basically I just love running!
Previous Post
An ‘Active Holiday’ – Running the CCC Route over Three Days
Next Post
Trying to Unleash my Mountain Goat and Banish my Fairyness – CCC Race Report