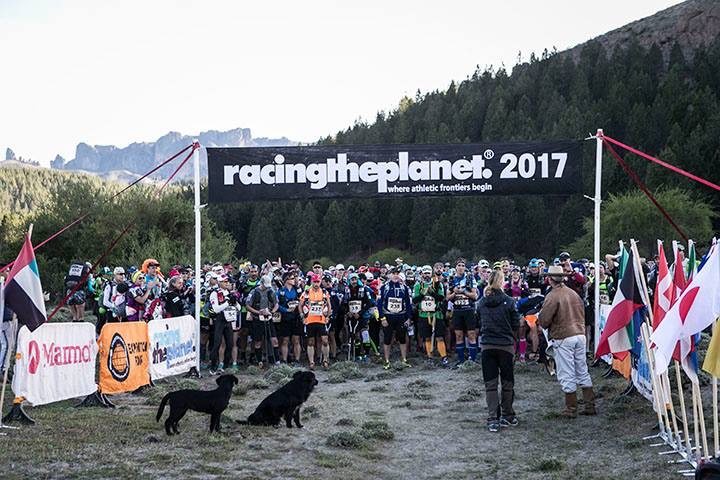 After all the travelling and pre-race admin I just couldn’t wait to run, and stage 1 started in pretty much the same way as all race days – a 5am wake-up, someone (normally Tom!) going on hot water duties, a morning cup of tea and then an 800 calorie freeze dried breakfast meal. We’d been expecting cold temperatures and rain in Patagonia, but instead were greeted with warm and dry conditions, which surprised everyone, especially us Brits who’d been expecting a ‘home advantage’ with the weather. I didn’t miss the cold nights though, and for the first couple of nights could just sleep in my running skirt and top, whereas in Atacama I’d had to sleep in every single item of clothing I’d brought with me and still shivered in my sleeping bag.

Stage 1 was going to be 25.7 miles and 4,000 feet of ascent, a perfect start to shake off any running cobwebs after feeling like we’d been pretty sedentary for the previous 4 days. At 8am the gaucho, whose land we were staying on, counted us down, Racing the Planet Patagonia was on!

Racing a multi-day race competitively is very different to racing a single-stage race as you have to strike a fine balance between racing hard each day, but not racing too hard in order to save something for each subsequent day.  So my plan for stage 1 was to completely run my own race and not get caught up with what any other runners were doing.

From the moment I set off, it was one of those perfect running days where everything fell into place. Even at 8am the temperatures were warm, and I fell into an easy pace on gorgeous trails alongside a river, and as I’d done so much training with my 6.9kg pack, it was barely noticeable on my back. After a few miles of undulating trails, we had a steep climb and then descent through stunning rock formations. I’d spent the last 6 months really working on my mountain goat levels and the uphills felt easy and I was considerably less of a fairy on the downhills. The terrain was very arid and desert-like with temperatures already at 30+ degrees, far removed from the cold and wet I’d been expecting.

At times I ran with runners I knew from previous races and at other times chatted to new runners, but for the most part I ran on my own, and as the trail twisted ahead and behind me, there were often times when I couldn’t see another runner and felt miles from anyone or anywhere – it was absolute trail running bliss.

I knew I’d been running as 1st lady all day but had no idea how far ahead I was of 2nd, so I ran strongly to the end, finishing in 5:23 (1st lady/24th overall) – it had been as pretty much a perfect first day of racing as I could have hoped for.

I met Tom at the finish, who despite going off track and adding an extra mile or so by making that fateful error of following the runner in front and not following the pink markings, had still finished in a solid 12th place in 4:57.

Neill had made a similar navigation error and although had clawed himself back to 1st, it had come down to a sprint finish with Romain the speedy Frenchman, with just 11 seconds separating them.

Claire finished 2nd in 5:46 and Magda soon behind in 5:50, followed by Rhianon who’d had a really strong first day, so although it meant I had a 23 minute lead after day 1, it was still way too early for this to mean anything.

Back at camp, I always follow the same routine – recovery shake, nuts for calories and salt replacement, and then rehydrate with lots of water and tea (rationing my teabags in camp so each teabag is reused three times – pretty much sacrilege for a tea drinking lover like myself!). This camp site also had the luxury of being next to a freezing cold river, so we could engage in a post-race ‘spa treatment’ of bathing our already filthy feet and legs in the icy water – bliss!

Sarah Sawyer
I’m Sarah, a Pilates teacher and Running Coach from Brighton, England. I run everything from parkrun to 100+ mile ultra marathons, and everything in-between. I run on trails, in the mountains, across deserts, on roads and around the track….basically I just love running!
Previous Post
Pre-Race – It Began in a Hotel in Bariloche
Next Post
Patagonia Stage 2 – The Stage which I thought was going to be easy but ended up quite hard