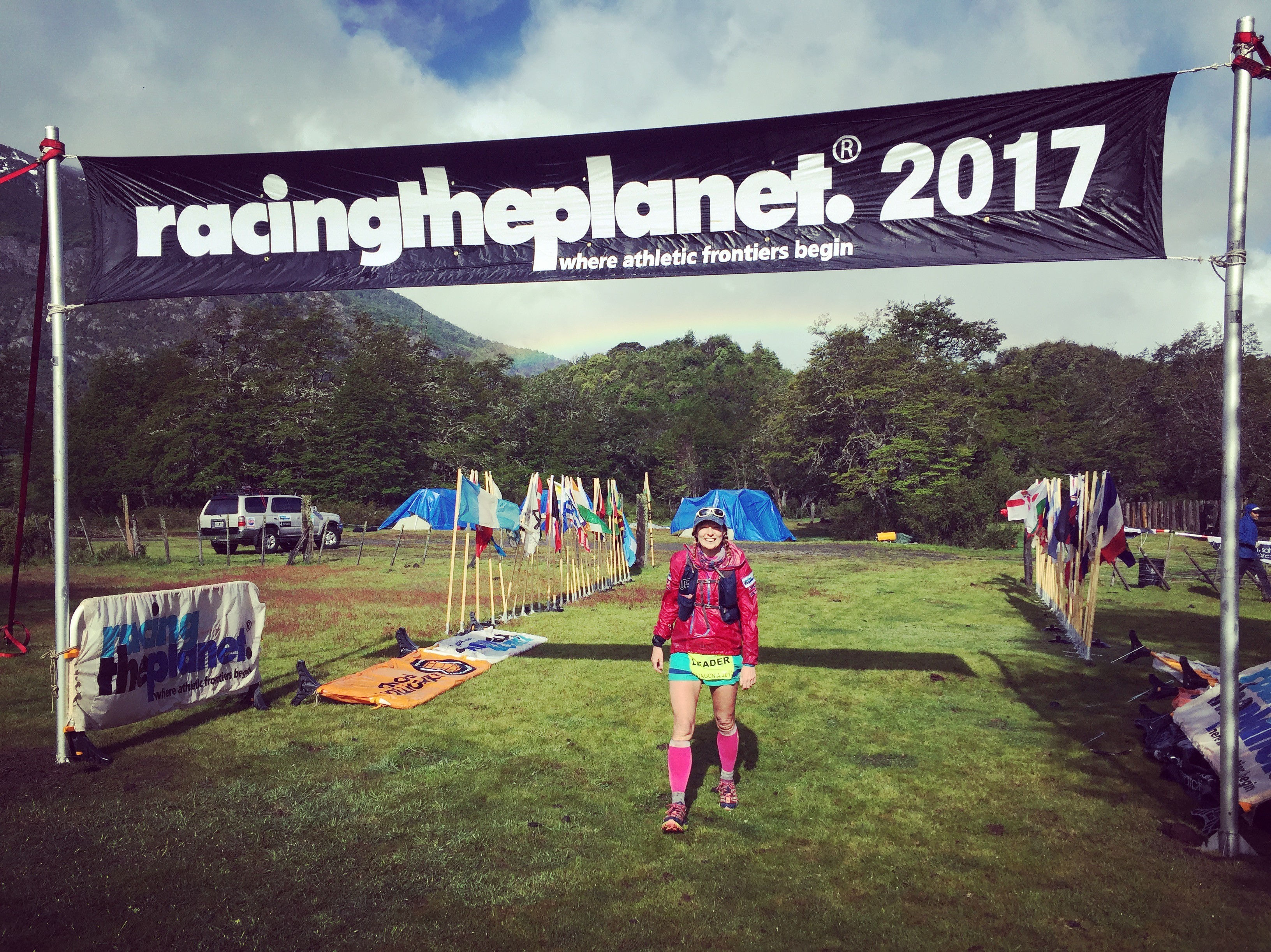 I woke up on the morning of the Long Stage with a mix of emotions – I was so sad for Tom that he wouldn’t be starting (the long mountainous stage in cool, wet conditions would have been ideal for him), although he was handling his fate much better than I would have done, as I would have been flouncing around camp in a flood of tears.

In addition, I felt apprehensive about potentially 10+ hours of hard racing ahead of me. I love the Long Stage of multi-day racing, but had struggled with the mental side in Atacama and worrying about where Isabelle was behind me. I was going into the Long Stage with just an 18 minute lead over Magda, and Claire was still very much in contention for the win at only 45 minutes behind me, which is nothing over almost 50 miles. My concern was also that Magda and Claire had better endurance than me – apart from the CCC, my only other ultra this year had been a dismal 100 miler at TP100 when I wasn’t well, so I wasn’t sure how my endurance would fare against these long-distance queens.

However I decided there and then that I was going to fight for this win like I’d fought for no other race result. It had already proved to be a brilliant 4 days of racing and I’d held onto the leader’s bib since the first stage, so now I was determined to keep hold of it until the bitter end. Also I wanted to win the race for Tom, who instead of being where he should have been out on the course, would have a long day of non-running ahead of him, waiting for me to return to the next camp.

At 8am we sent off in pretty torrential rain, which didn’t really ease off for the entire time I was running, although this wasn’t a problem and is the kind of weather I’m used to training in as a Brit. Although my lead was only 18 minutes, psychologically this meant I did have the upper hand, so rather than stressing how far Magda was behind me like I’d done in Atacama with Isabelle, I decided to let Magda lead and I’d follow. The longer I kept her in sight, the more chance I had of winning the whole thing. And if I couldn’t keep up with her, then she was the better runner and deserved to win.

We headed onto gorgeous single track wooded trails and I tucked in behind Magda. There’s always some apprehensiveness at the start of the Long Stage as to whether you’ve pitched your effort level right in the previous four stages and left enough for the Long Stage, but from the word go, I felt brilliant and my legs were ready to race.

A mix of gorgeous and technical trails followed; Magda was pushing the pace, but it felt manageable and after 12 or so miles there was still nothing between us. We then had a steep mountain section where we covered about 2,200 feet in 6 miles, and this was the first time I felt that I was coming out on top over Magda. All the times I’d run up and down Snowdon and Pen y Fan in the summer for CCC training came to fruition, and I seemed to be finding this section easier than Magda. The trails were really technical with fallen trees, so many tree roots and rocks (where I kept bashing my already poor bruised toenails) and endless mud and umpteen river crossings. Despite the RTP pink markings being superb, a lot of the trail was very overgrown, and at some point, without any need for communication between us, Magda and I started to work together – two pairs of eyes were better than one at spotting the right route to follow, and together we helped each other over tricky mud and river sections, and had to wade through one particularly deep and fast flowing river hand in hand to keep us both upright. There was so much mutual respect between us and we’d become great friends, but ultimately this was a race and only one of us could come out on top.

As we finally reached the summit, I felt really strong and for the first time all day overtook Magda and descended down to the next checkpoint with ease. This hadn’t been my plan as I wanted to follow for as long as possible, but I felt so strong that I wanted to capitalise on it.

And from that point onwards I ran out in front; the miles flew by and in my head I felt like I was flying through the Andes. I knew I was running strongly as I was overtaking men who’d finished ahead of me in previous stages, however I couldn’t afford to ease off, as if I was having a good day, there was absolutely no reason why Magda couldn’t be. There were more wooded trails, a black beach section and a gorgeous lake to run around. This was my fourth Long Stage in a multi-stage race but was my absolute favourite.

I only had one low point just before the penultimate checkpoint – I’d got my miles and kms mixed up and thought I had three more checkpoints to go and this section seemed to go on forever and I felt a bit weary, both mentally and phsyically. But when I arrived at the checkpoint to be greeted by three of my favourite volunteers, Susan, Bev and Karina, they gave me such a huge cheer and hugs, that I left with a massive spring in my step and ready for the final push to the finish line.

I passed through the final checkpoint manned by the ever present wonderful RTP stalwart that is Tony, who told me that I only had 5.7 miles to go. I still had some good running in my legs and I wasn’t going to ease off until I crossed that finish line. Even with 3 miles to go, I still had this fear of Magda appearing from nowhere and sailing past me running sub 6 minute miles and taking the overall lead for the week – I doubt even Neill was pulling out sub 6 minute miles with just 3 miles to go on the Long Stage, but ultras make you think a bit irrationally at times! With a mile and a half to go though, I was finally confident the victory was mine and I ran into the grounds of the final camp. 9:45 hours of some of the best running I’ve ever run in an ultra, 1st female and 23rd overall. Short of an absolute disaster on the final stage (just over 4 miles to the finish line), then I was going to be the female champion.

I wanted to wait around at the finish to see Magda, Claire and friends come in, but after about 15 minutes of waiting, the fact that I’d been wearing soaking wet clothes for the past 10 hours started to hit me, and I started shivering uncontrollably and knew if I didn’t get changed soon, hypothermia was going to hit. Tom and Neill (who’d also won the Long Stage and was guaranteed overall victory) took me back to our tent and I put on every item of dry clothing I possessed and tried to get warm in my sleeping bag.

Rhianon was next ‘home’ in tent 17 (she’d had an amazing run and finished joint 3rd with Claire), followed by Matt and Johnny, and then Tayla, all exceeding their pre-race targets, so all tent 17 were home before 8pm. I’d like to say we all slept like babies after a long day, however we were all a bit giddy and delirious, and as the rain, snow and wind continued to batter our tent, we did all wonder if our tent would make it through the night. Throw in the finish line drums announcing the arrival of each finisher, and it didn’t make for a conducive night’s sleep, and we eventually gave up on patchy sleep at 6:30am, the drudgery of the rest day ahead of us.

Sarah Sawyer
I’m Sarah, a Pilates teacher and Running Coach from Brighton, England. I run everything from parkrun to 100+ mile ultra marathons, and everything in-between. I run on trails, in the mountains, across deserts, on roads and around the track….basically I just love running!
Previous Post
Patagonia Stage 4 – The Stage of ups (for me) and downs (for Tom)
Next Post
Patagonia The Final Stage – It finished in front of the Black Glacier of Tronodor

It’s yrs since Tom + I have stood on the same start line, Tom is faster, I’m better in heat, who will finish as 1st Sawyer🤔😅🤣