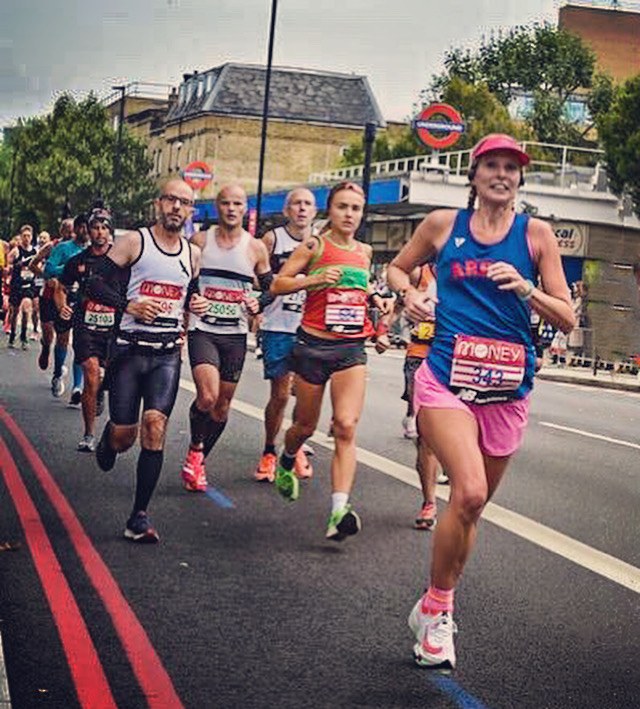 I love running road marathons, but I’d never had any interest in running London marathon. I supported Tom there when he ran it as his first marathon, and I watch it every year on TV, but it had always struck me as all the things I don’t want when I race – too many people, too much hanging about at the start, and too crowded to run a good time.

But then 5 years ago I learnt about something called the Championship start and I decided it would be pretty cool to try and qualify for it (to qualify you need to run a sub 3:14/2:44 marathon for women/men). However, the thing that I’d not factored into this was that I’m not actually very good at running marathons, so it took me 4 years to finally run a qualifying time (at Goodwood marathon last December)!

If I’m being honest, I was more excited that I’d qualified for the Championship start than I was about actually running London, and London was just one of a whole list of races I had between August and October, all of which, apart from London, were COVID rescheduled races from previous lockdowns.

However, as London got closer I started to get sucked into the buzz of it, and by the time I went up to the Expo on Wednesday to pick up my bib number, I was giddy with excitement and couldn’t wait for race day.

Although my main goal is Brugg 24 hours later in October, I knew I was in good shape over shorter distances as I’d run a 5k and 10k PB in the two weekends prior to London. So whilst I wasn’t fully tapering for London and would be following it up with a big final week of training for the 24 hour, I wanted to give it my best shot. My A goal was 3:10 and my secondary goal was to get under 3:14, which would give me the Championship qualifying time again, if hypothetically speaking I wanted to run London again!

Apart from the world’s longest train journey from Brighton to London at 5:30am Sunday morning (I’m positive the train stopped at stations that don’t normally exist!), all the pre-race logistics were straightforward and the Champs start has its own special start away from the mass start. The time waiting for the race to start flew by as I caught up with various friends, and then there was none of the hanging around in start pens that I’d seen on TV – as soon as the elite men went at 9:30am we were set off straight after them.

After the first 4 miles I settled into 7:10-7:15 pace and each mile flew by and felt so easy, however I know marathon pace should feel super easy at this early stage! People always speak about the crowds at London, but this had never interested me (I mean come on, I’m happiest running around a track for 24 hours with no support!), but I take it all my back. The crowds at London are that special. Crowds lined the street for pretty much the entirety of the 26.2 mile route, and Cutty Sark at 6 miles was the first place where I got to witness the full London crowds experience. And then I was positive that I wouldn’t be bothered about the crowds packed onto Tower Bridge, but running across there did feel almost emotional.

But back to the running, and all I kept thinking was how good I felt, how easy this felt and how I was loving every minute of it. My smile said it all and I grinned my way around the course. However, I know the marathon is a cruel beast and there is nowhere to hide with it, so you can’t ever fully relax until you cross the finish line, so there was still some apprehension that at some point I would stop feeling so good and the wheels would fall off.

I went through half way in 1:34 which was bang on target for a 3:10 finish time. Mile after mile was ticked off, still hitting 7:10-7:15 pace, my only regret was that the miles were going too quickly that it was going to be over all too soon!

I’d been warned that watches tend to lose GPS signal in Canary Wharf and at mile 18, my watch started showing that I was running 8:30-9 pace. For a minute I panicked, but then I trusted my pacing and knew that there was no way I could have slowed down by 90 seconds a mile, and after a couple of miles in Canary Wharf my watch was showing 7:15s again. Up until this point I’d felt brilliant, but around mile 19/20 I thought I might need a quick road side sick stop, but I took my final MF jelly and that settled my stomach and got me back on track.

I knew my watch distance was out after losing GPS in Canary Wharf but from the mile markers, with 3 miles to go I worked out that I could be on for a PB. I’ve never felt so strong in the final miles of a marathon, yes my legs had started to hurt, yes I was looking forward to stopping, but I had every confidence that I could run strong to the end.

I turned onto the Mall and for the first time switched my watch screen to my overall running time and as the final metres counted down I realised that I was going to get a 3:10:something finish time.

I crossed the line in 3:10:34, an 80 second PB, the strongest I’ve ever felt running a marathon, and most importantly I had loved every minute of it.

My legs felt a bit shell shocked at they finish. I’ve said it numerous times but I truly believe running a marathon hard is way harder than virtually any ultra I’ve run. However, once my legs started walking they eased off, and then I literally skipped through the finish area to meet Tom in the meet and greet area and then hit the pub with friends who’d been out running and supporting. My smile says it all, London marathon was everything I had hoped for more.

I thought I would be the last person who would get sucked into the whole London marathon thing, but now all I can think is when do those Championship entries open for 2022?!

Sarah Sawyer
I’m Sarah, a Pilates teacher and Running Coach from Brighton, England. I run everything from parkrun to 100+ mile ultra marathons, and everything in-between. I run on trails, in the mountains, across deserts, on roads and around the track….basically I just love running!
Previous Post
Centurion Track 100. That fine line between success and failure.
Next Post
Desert Solstice. ‘Failure is the key to success; each mistake teaches us something’ (Morihei Ueshiba)

Do you remember how we looked at the US when Trump was president?

This is how other countries look at us now.