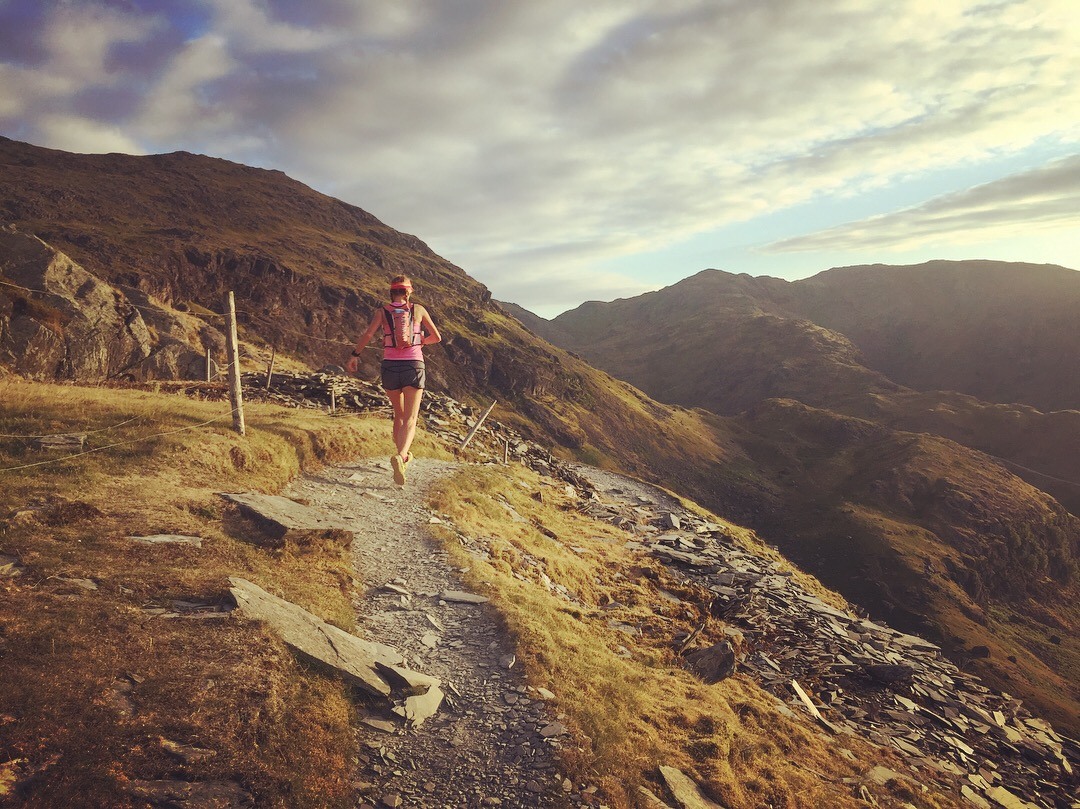 How a Fairy who lives on the South Coast trained for a 123k/7,000m race in the Pyrenees

Last year I decided to dabble in mountain ultras when I ran the CCC. The result was I loved every minute of training and racing, and found the race itself almost too ‘easy’. The conditions were pretty challenging with  freezing conditions and torrential rain turning the mountain descents into mud baths where I lost lots of time, but nothing could wipe the massive grin off my face that was plastered on it for the entire duration of the race. And whilst I wasn’t going to win any prizes for my finish time of 20:30, I felt it was an acceptable time and performance for someone who’d never raced in the mountains before, and who is by my own admission a bit of a fairy.

I knew I wanted to run the UTMB one day, and whilst nothing is a given in ultras, I felt confident now that I could finish the UTMB. However, I decided I wanted to improve in the mountains before I attempted it, rather than just ticking a box to say I’d finished it. There were two particular areas where I wanted to get more practice and experience  – technical descending and being out on my feet for longer. Because I’ve done a lot of high altitude trekking in the past, I didn’t find the CCC climbs that hard, especially as you never reach high altitudes in the CCC (the highest point of the race is only just over 8,000 feet and most of the race is run under 6,500 feet). And when it comes to non-technical descending, I know I’m pretty strong on the downhills (you don’t have quads the size of mine if you can’t use them to your advantage!). However, put a rocky technical descent in front of me and I turn into a teetering fairy. I’ve always just assumed that ‘once a fairy, always a fairy’, but Ian assured me that it’s possible to make big improvements on your technical descending, so my big focus of the summer was to try and make myself ‘less fairy’.

The main thing which scares me about the UTMB is the fact that because of the Friday evening start time I’ll be out running through 2 nights. Up until I ran Crawley 24 hours this year, I’d never even run for 24 hours before, so I wanted experience of being awake and on my feet for longer, in preparation for being out for up to 40 hours in the UTMB.

Therefore, I wanted a race that was longer and more technical than the CCC, and the Grand Raid Pyrenees Tour des Cirques seemed to fit my race brief perfectly. At 123k it’s 23k longer than the CCC, has more elevation (7,000m to the CCC’s 6,000m) and crucially is much more technical. This is reflected in the 40 hour cut-off (compared to the CCC’s 26:30 hour cut-off), so I knew it would test me over much more technical terrain and give me experience of being out on my feet for longer. It seemed the ‘logical’ progression between the CCC and UTMB.

Getting ready for GRP vs CCC

Last year I started working with my new coach Ian Sharman at the beginning of July so we only had 9 weeks until race day. This year from the moment I’d had a bit of time off for Crawley recovery, we had 18 weeks to really focus on hills and mountain training.

Last year I was a bit distracted from my end goal of the CCC, so ran some other races in the build-up to it which had no bearing whatsoever on the CCC (a flat 30 miler, a night trail marathon, a couple of 10ks and a couple of parkruns). This year I ran NDW50 and Global Limits Bhutan in the early part of the training block as hard training runs and to get some hills back into my legs, but apart from that I didn’t race at all and just focused on training,

Finally, this year I spent a lot more time in the mountains and on more technical terrain to give me more practice on my technical descending, Last year I spent a couple of weekends in the Brecon Beacons, a weekend doing Snowdon reps and a long weekend in the Alps running the CCC course. This year I spent virtually every weekend away with several trips to the Brecon Beacons, a trip to Snowdonia, a trip up to the Peak District, a long weekend in the Lake District and 9 days in the Alps.

As you’d expect for training for a mountain ultra, hills have to form a fundamental part of your training. However, the closest hills to me are the little molehills of the South and North Downs, which are pretty redundant when it comes to mountain training. The South/North Downs average out at around 100 feet per mile; in the Pyrenees the race averages out at around 300 feet per mile. The other main difference is the length of the ascents and descents which can go on for several miles at a time. However, you have to work with what you’ve got, so I moved all my weekday runs onto the South Downs and by being ‘creative’ with my routes (ie incorporating a lot of long reps), I could accumulate about 2,000-2,500 feet over a 7-8 mile run. Ian also moved all my speedwork onto the Downs, so there were hill reps, mile reps, downhilling reps, fartlek runs, tempo runs and progression runs all carried out on the Downs. That combined with the weekends away on what I call ‘proper hills’ meant that I felt I was in the strongest shape I’d ever been on hills.

As with any mountain race, there’s no telling from one year to the next what the weather is going to be. Previous years have seen everything from freezing sub zero conditions to 40 degrees and baking sunshine. I tend to be fine running in the heat and have run in deserts and jungles with no issues, however there are massive proven benefits to proper heat acclimatisation so we decided to get me doing a few heat acclimatisation runs. This basically involved putting as many layers of clothes on as you can (I wore 4 pairs of winter running leggings, 5 tops including 2 ski tops, waterproof trousers, a down jacket, a woolly hat, polar Buff, mountaineering gloves and winter socks) and running so you overheat your core temperature to the point of almost exhaustion. It might sound a bit grim but I actually really enjoyed it in a perverse kind of way!

From mid-April I’ve also been doing 5 weighted rucksack hikes per week (aka my infamous ‘chickpea hikes’) which for me is the single best piece of cross-training you can do for mountain training as it’s so good for strengthening and conditioning the legs for the long uphills and downhills. In addition to this for cross-training I do my usual Pilates classes for core strength which is vital for mountain races and I’ve increased the number of hot yoga classes I do a week for some additional heat acclimatisation.

As a result of this, my legs feel the strongest they’ve ever been and I’ve had no injury niggles. If you ignore the fact I’ve got quads and calves bigger than most men’s and I don’t know when my legs will ever fit into a pair of jeans again, it’s been a good training block!

I learnt a lot of what worked for me last year when I was mountain training and running the CCC, so it’s simply been a case of fine tuning this for GRP.

Trainer-wise my go-to mountain running footwear of choice are either La Sportiva Akashas or Scott Supertrac RCs. I ran the CCC in Akashas and I know they give me lots of protection, however the Supertrac RCs give me better grip than the Akashas, but I wasn’t sure if they would give me enough cushioning for the time I’d be out running. However, Scott came to the rescue and in July brought out the Ultra version of the Supertrac, which gives the same grip as the originals, but with more cushioning. I tested the Ultras out on two 20 mile runs on Snowdon and they are absolutely superb – great grip and protection, yet still maintaining some of the responsiveness of the originals.

I’ll be using Leki poles which are super light and fold up and down easily. Over 95% of runners, including most of the elites will use poles for mountain races in Europe, and there’s a reason for this. I figure if the likes of Kilian and Francois use poles, and they seem to know what they’re doing in the mountains, then I’d be stupid not to use them.

There’s quite an extensive mandatory kit list as you’d expect for a mountain ultra, and I’ll be using the Salomon Sense S-Lab 8l to carry it all as I love it’s storage and ease of accessibility.

As always, thanks to Likeys for supplying me with this and lots of other fab kit.

This last year has been the year I finally nailed my nutrition in ultras, and I’ll be getting the bulk of my calories from Mountain Fuel Energy drinks and Jelly’s, plus their Recovery drinks every 4-6 hours, and Longhaul Endurance pouches for ‘proper’ food.

So as far as training blocks go, I don’t think a fairy who lives on the south coast could have done any more to prepare myself for a mountain race in the Pyrenees, so whilst I’ll never be able to compete against real European mountain goats, I definitely feel like I have done the training to produce a performance and time that I’ll be happy with.

The ironic thing is that while I feel like I’ve achieved my objective of improving in the mountains (and I’m definitely less fairy!), this training block has made me realise my (running) love doesn’t lie in the mountains. I’ve enjoyed the training and I can’t wait to race in the Pyrenees, but a part of me just can’t wait to return to ‘normal’ running. I’m a bit bored of all the hiking you inevitably have to do in mountain races and I’m bored of 20 minute miles clambering over rocks! So I’ve scrapped my plan to hopefully do the UTMB next year (I went into the ballot this year, solely to get a coefficient of 2 for next year), and whilst I think at some point down the line I’ll want to return to mountain running and will do the UTMB, in the shorter-term I want to improve my 100 mile PB and try and improve my distance over 24 hours.

So after GRP, bring on the tarmac and runnable trails!

Sarah Sawyer
I’m Sarah, a Pilates teacher and Running Coach from Brighton, England. I run everything from parkrun to 100+ mile ultra marathons, and everything in-between. I run on trails, in the mountains, across deserts, on roads and around the track….basically I just love running!
Previous Post
Global Limits Bhutan – A few final thoughts on kit, equipment, nutrition and the all important ‘to self-support or to go supported’ question
Next Post
13 ‘The Hard Way’ – A good reminder that my legs still know how to run