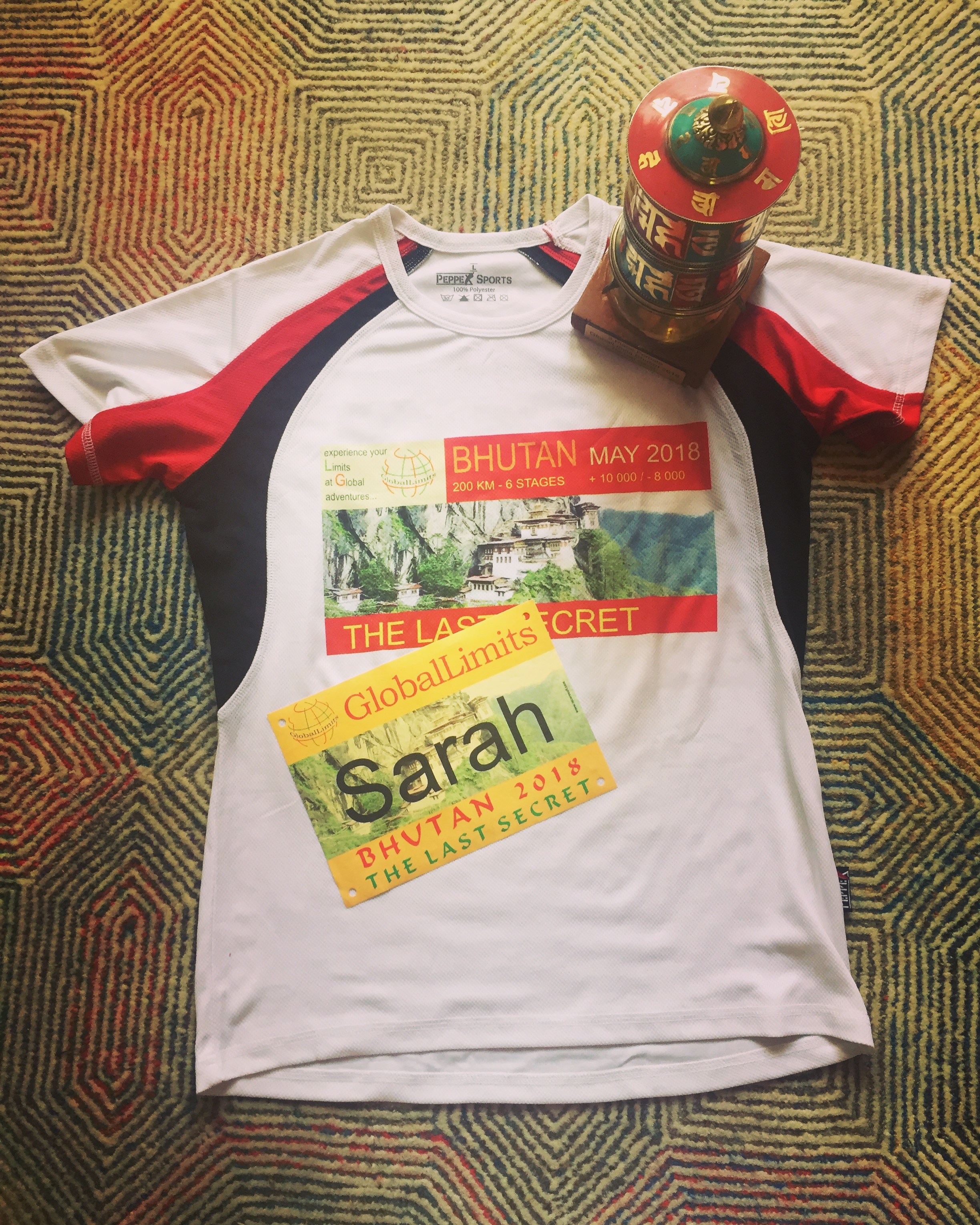 Global Limits Bhutan – A few final thoughts on kit, equipment, nutrition and the all important ‘to self-support or to go supported’ question

My main reasons for signing up were to visit Bhutan and run in a place that’s long being on my travel bucket-list, and to get a good week of running in the mountains to really kickstart my training for GRP Tour Des Cirques in August, after all the flat running I’d done in the early part of the year for Crawley 24 hours. I’d also had friends who have run Global Limits races who sang the praises of them.

From the initial planning stage, I found there to be big differences between supported and self-supported races. When I’m getting ready for a self-supported multi-day race, I’m painstakingly weighing every item I’m going to take, and coming up with weight saving tips wherever I can, to get my rucksack as light as possible. In contrast, with Global Limits we were allowed a whopping 10kg weight allowance that would be transported to each camp for us. And believe me 10kg is a LOT of weight allowance!

My weight allowance was mainly taken up with an array of running outfits – yes I know there’s no need to have a different running outfit for everyday, but I figured I’ve got the weight allowance so I may as well use it! I also left all my running kit out in Bhutan, so I’d like to think that there’s some ultra running stars of the future running around the Bhutanese mountains in pink running skirts and compression socks! In seriousness though, whilst five different outfits might be considered overkill, it was really nice to put clean clothes on each day (after having to run/recover/sleep in the same one outfit in self-supported races!), especially as the weather conditions were very changeable from hot and humid all the way through to cold and wet.

Probably of more practical use out of my 10kg weight allowance was taking two pairs of trainers. I’d read a couple of blogs from previous years’ races and knew that days 2 and 4 were on much more technical terrain and I’d want more grip on my trainers. So I took Hoka Speedgoats for the technical days and La Sportiva Akashas for the days when I wanted more cushioning and protection. Both trainers were absolutely superb for their respective jobs, so I’d definitely recommend taking two pairs of trainers….even if it’s only so you don’t have to run the risk of ‘doing a Bobby’, whose trainers split after day 4, and was allowed to go into Paro to see if he could buy a new pair. As you’d imagine, Paro isn’t a hotbed for trail running trainer purchases, so instead he came back with a roll of industrial tape!

There was a much more minimal mandatory kit list for Bhutan than I’ve been used to for self-supported races, and most of it didn’t even come out of its zip-lock bag – although we had some rain, it was after I’d finished running each day, so my Inov-8 Stormshell didn’t get to see Bhutan; my security blanket, knife, whistle and blister kit weren’t needed; I occasionally used my Petzl E-lite for middle of the night toilet trips or early morning preparation; and don’t tell anyone but I don’t even know how to use the mandatory compass!

My Marmot Phase 20 sleeping bag was actually too warm for the lower camps (so I just slept under it) but I definitely appreciated the higher sleeping bag rating at higher altitude. And I say it after every multi-day race, but don’t ever try and do without a sleeping mat, and my trusted Thermarest NeoAir sleeping mat kept me pretty comfy on its fifth multi-day race. Some runners did have inflatable pillows which did give me a bit of ‘inflatable pillow envy’ so I may consider getting one for my next supported race.

One new piece of equipment which got its first real outing in Bhutan were my Leki Micro Trail Pro poles. Virtually every runner used poles, in fact if I hadn’t had mine, I’d probably still be teetering around on the mountain on stage 2! The Leki poles are superb, and if you’re going to be doing a lot of mountain running are definitely worth the investment.

The other big difference between supported and self-supported races is that we got given three meals a day in Bhutan (rice, noodles, pasta, vegetables, soup, fruit) and just had to bring our own snacks. I realised at kit-check that in my over-excitement at not having to carry all my own food for a week, I’d brought enough snacks for half of camp! So I left half of it in my bag at the hotel and still had food to spare at the end of the week – the thought of finishing a self-supported race with any food left is completely inconceivable!

The altitude didn’t affect my appetite like it did some people’s, what I did find though was the heat and humidity at the lower levels made me want to eat less, in particularly solid foods, and drink a lot more than I usually would.

I took 3 x Mountain Fuel Energy Fuel per day (and despite the checkpoints only being about 10k apart always carried 3 x 500ml Salomon soft-flasks with me as I knew the heat and altitude was making me drink more), Longhaul pouches for every stage, and then topped up with 32GI Energy Chews and GU gels. I did take some Torq bars and GU waffles but only ate them back at camp as they felt too heavy to digest when running. Immediately at the end of every stage I had a Mountain Fuel Recovery Fuel and some nuts, and then a Mountain Fuel Night Fuel before bed. Being fully fed, and not calorie deficient as you inevitably are in self-supported races, makes a big difference to your recovery during the race and post-race. I arrived back in England on Saturday night and my legs certainly didn’t feel like they’d run 125 miles the previous week, and I’ve been out running every day since I’ve got back, and I definitely attribute this in part to being properly fuelled throughout the race.

The question that people have inevitably asked me is ‘what are the hardest/best – self-supported or supported?’. Firstly, I hate anything that claims to be ‘the hardest or toughest’ – all races can be ‘tough’ if you’re running to your absolute max, or you’re out of your comfort zone, or you’re exposed to challenging conditions which you struggle to adapt to.

The thing that I find hardest about self-supported races is training with a 7kg pack. However, if you’ve trained properly with a pack, then once you get to race week, then running with a weighted pack should feel second nature to you. And also your pack does get significantly lighter each day as you eat all your food. But at the end of the day it’s not normal or easy to run with a weight on your back! In contrast though, I didn’t really need to train any differently for Bhutan than I would any single stage ultra, it was just about making my training as specific as possible for the terrain I’d be running on, If you’ve got a strong endurance background, then it’s possible to drop a supported multi-day race into your race calendar, and think of it it as a high mileage training week/‘active holiday’.

The other thing I find hardest about self-supported races is living on freeze-dried rations and being calorie deficient for a week. Therefore being fully fed in supported races means you’re not having to manage that fine line of taking in enough calories and being able to run well every day, and as previously mentioned food obviously helps your recovery from one day to the next.

Although Global Limits is first and foremost a race, Stefan wants to make sure his runners enjoy the experience and we were allowed to use local shops to buy food enroute or to buy a post-stage beer, whereas this is an absolute no in self-supported races.

The other thing I preferred about the Global Limits format is that you have 6 days of running and no rest day. I’m not a fan of the rest day – you’ve essentially done all your running, the race is over bar a short ‘victory parade’ so the placings are generally guaranteed….yet you have to waste a day round camp feeling hungry, bored and fed-up before commencing the final stage. Here we finished the long stage on Thursday, and were able to have a few beers that evening, before the final 10 mile push to the finish line at Tiger’s Nest on Friday.

I can categorically say though that supported isn’t an ‘easy’ option; in fact because you’re not running with a 7kg+ pack and just with a day pack, it meant Global Limits was a lot more technical in places than any other multi-day race I’ve done (it simply wouldn’t have been possible to run some of the trails we did with a full weighted pack on our back).

I think every runner who wants to try multi-day racing should at least do one self-supported race as there is something very liberating about running (and surviving) with all the belongings you need on your back for a week. However, personally I think there’s room for both supported and self-supported races in the multi-day market and it’s simply down to personal preference and not a case of one being better than the other. I’m sure I’ll be back to self-supported races at some point, but after four self-supported races in 4 years, I’m taking a bit of a break from them and embracing the day pack, the 10kg weight allowance and a multitude of different running outfits!

Sarah Sawyer
I’m Sarah, a Pilates teacher and Running Coach from Brighton, England. I run everything from parkrun to 100+ mile ultra marathons, and everything in-between. I run on trails, in the mountains, across deserts, on roads and around the track….basically I just love running!
Previous Post
Global Limits Bhutan – A Magical Week of Running
Next Post
How a Fairy who lives on the South Coast trained for a 123k/7,000m race in the Pyrenees

@Susie__Chan @james_stewart13 Thank you!🙏 Can’t believe I didn’t see you on Friday/Saturday - we skipped the awards for the football yesterday!😆