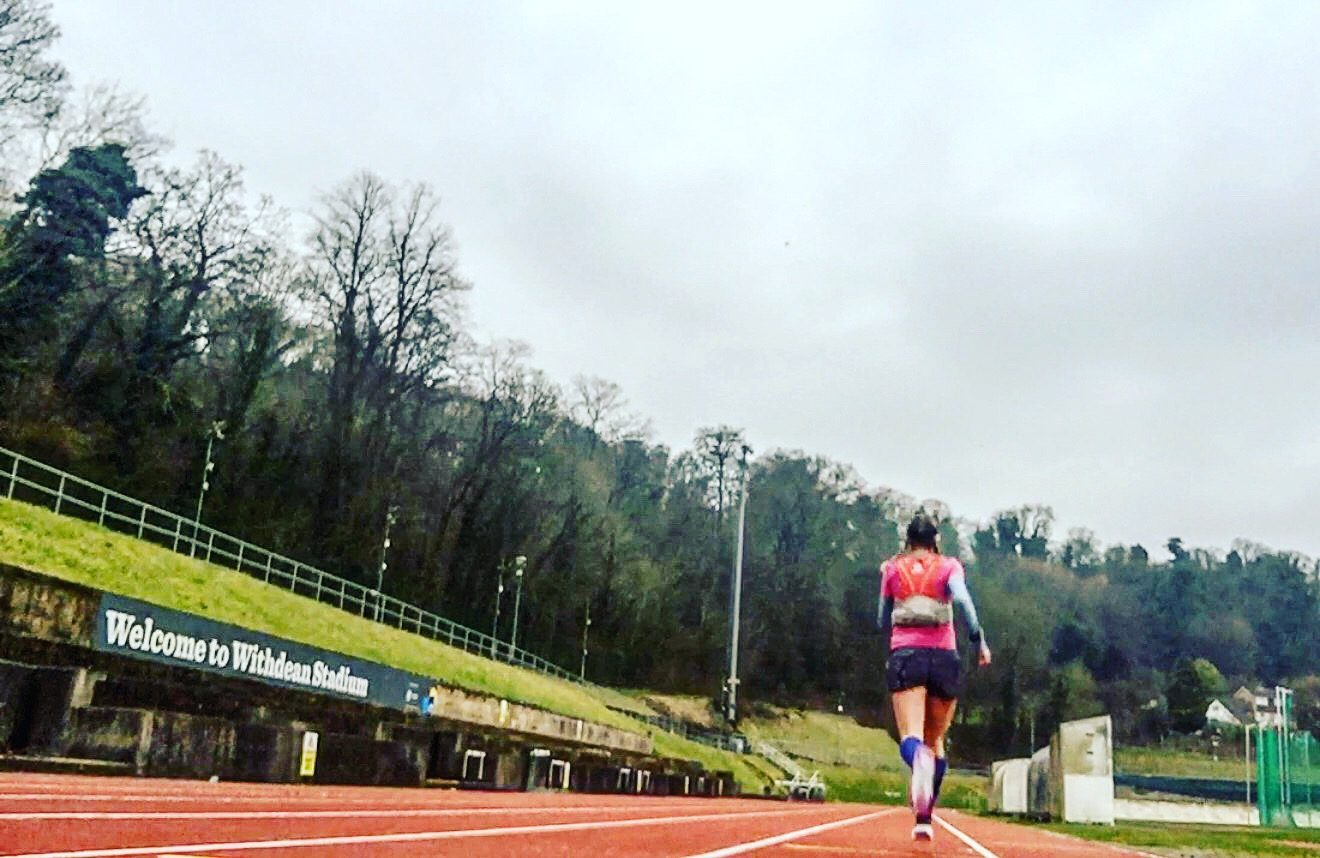 24 hour track racing seems to polarise people – people either love the fact that it’s ultra running in its most purest form….or just the thought of running round and round in circles is enough to send them over the edge! I’m firmly in the former camp and a 24 hour track race is something that has been high on my radar for a couple of years, and Crawley 24 hours (organised by the highly respected Pam Storey) this year was the first opportunity I had to really train for and race one properly.

Although my race in Seville hadn’t gone to plan (and I’d come down with a really bad cold afterwards which probably explained my woeful performance), the training for it had gone brilliantly and set me up perfectly for Crawley 24 hours. So post-Seville, it was mainly just a case of introducing some long slow runs at my 24 hour pace into my training.

After Seville, I did a 40 mile back to back weekend (split by 20 miles on the seafront on the Saturday/20 miles on the Withdean track on the Sunday, all at my 24 hour pace), plus long runs of 30 miles and 26 miles on consecutive weekends at my 24 hour pace (which included some MP miles), backed up by a medium length hilly trail run. For me personally, I don’t think there’s any need to ever run more than 30 miles as your longest run in training for a 100 miler or 24 hour track race; in fact when I ran my current 100 mile PB of 18:39, my longest run was 25 miles. My coach is a big advocate of consistency and quality over quantity, and my three highest mileage weeks for Crawley were only around 75 miles. And whilst I wasn’t doing as much hard speedwork as I did for Seville, there were still two quality speedwork sessions per week.

As you’d expect from running the flattest marathon in Europe and then a track race, flat running has been the order of the day in training. So I’ve waved goodbye to my power sized quads from last year’s mountain training, and for this my legs have covered miles and miles of laps of Preston Park velodrome and the track at the Withdean, or Brighton seafront. Some people can’t understand it, but I genuinely do love switching off and running laps with no distractions. I’ve done numerous 20+ mile runs around the velodrome starting at 4/5am in the morning, so I genuinely don’t think the monotony will be a problem for me.

I’ve obviously got no idea how I’m going to fare at 24 hour racing (I’ve run a couple of decent 100 milers but I know better 100 mile runners than me whose 100 mile talent hasn’t transferred onto the track), but I think you should go into every race with a target, and this is probably never more relevant than with 24 hour racing where there isn’t a finish line per se. I also think it’s a good idea to have a distance to aim for, so that when it gets to 4am and you start to question why you have been running around a track in Crawley for 16 hours and still have another 8 hours to go, then you remember your reasons for doing it in the first place!

So my A target is 204 km/127 miles which the eagle eyed ultra runners of you will probably recognise as the Spartathlon female auto-qualifier distance. I do need to caveat this by saying I don’t actually know if I want to run Spartathlon as it’s a REALLY LONG WAY! However, it seems like a tough challenging target to aim for. And as a minimum I want to run 120 miles. However, I’m under no illusion how difficult 24 hour racing is, and many seasoned and top ultra runners say it’s the hardest type of ultra they’ve run if you’re targeting higher mileage, so my lofty targets might be way off the mark!

I’ve had plenty of practice fine tuning my 24 hour pace, which should feel like a pace I can maintain all day. So whilst there will be some inevitable slowdown with muscle tiredness, I’ve spent a lot of time chugging along at 9:45 – 10 minute mile pace, which will be my starting pace on race day and the pace I aim to hold for as long as possible – at over 2:30 minutes slower than my MP it has felt ridiculously easy in training, but I’m sure it’s going to feel very different at mile 70 on race day!

The simple logistics of a 24 hour track race basically means you’ve got your own personal aid station every 400 metres, which will be manned by my number one crew Tom. I’m going to run in Hoka Cliftons, and whilst I’ve never changed trainers mid-race, I’ve also never run for 24 hours before, so I’ll have a pair of Hoka Challengers as a back-up just in case. They’re both super comfy and I’ve run 100 milers in them both before. I’ll also have a few warmer layers for through the night if it’s get chilly and some basic first aid items, but I’m pretty low maintenance and that’s about as complicated as I get.

I don’t tend to run with music, but I think if ever there’s a time I might need a music pick-me-up it’s likely to be in the middle of the night when I’m running around a track in Crawley! So I’ve dug out my 10+ year old iPod which is full of musical delights of trance and house classics from the 90s/00s which will take me back to another life, where I’d also be up at 4am on a Sunday morning, albeit for very different reasons!

I’ve got a nutrition plan where I plan to eat something small every 30 minutes and then something a bit more substantial every 60 minutes (which I’ll tie in with a walking break) so I’m taking in between 200-300 calories per hour – this method has worked for me in my most recent ultras, and I’m a big believer in if it’s not broken, then don’t fix it. My nutrition will consist of Mountain Fuel Energy Fuel and Recovery Shakes, Longhaul Endurance pouches, Nakd and Torq bars, GU Waffles, M&S cheese savoury rolls and 32GI chews. Then if all else fails, Tom has been instructed to go down the fruit, Hula Hoop crisps and Sprite route!

I know from running a couple of flat 100 milers that personally I find them more damaging to the legs than a hilly 100 miler, simply for the fact that you’re using the same muscles continuously. The way to get round this is to introduce short walking breaks from the start (I did this at Berlin 100 with good success), so my plan is to walk a full lap of the track every hour and tie it in with an eating break. I’ll use this strategy up until at least 12 hours and then adjust accordingly in the second half. Apart from my enforced walking breaks, my aim is to run for as much of the 24 hours as I can. I’ll be really disappointed with myself if I end up with a 4-6 hour death march to the finish – I’m a runner and I’m there to run!

So all the training has been done, I’ve got a race plan and a nutrition plan that I’ve tried and tested on other ultras, now I just need to see what the reality is and how far these legs are capable of running in 24 hours!

Sarah Sawyer
I’m Sarah, a Pilates teacher and Running Coach from Brighton, England. I run everything from parkrun to 100+ mile ultra marathons, and everything in-between. I run on trails, in the mountains, across deserts, on roads and around the track….basically I just love running!
Previous Post
When Races Go Bad
Next Post
Crawley 24 Hours – Things I Learnt from Running Around a Track for 24 Hours