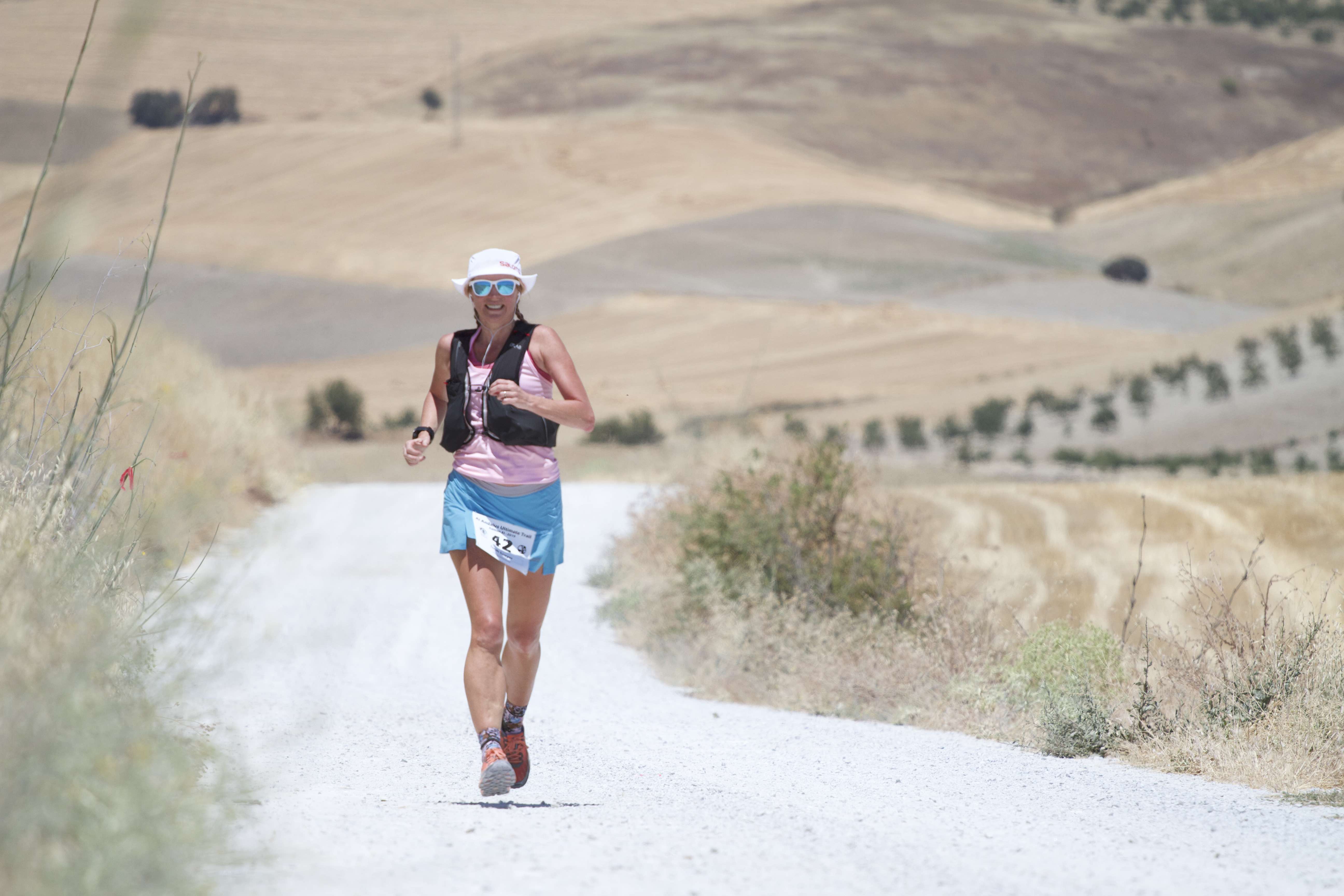 AAUT Days 1-3. Basically running and eating my way around Andalucía.

One of the hardest things for me to get used to at AAUT was the late race starts, I’m a total morning person and normally run at 5am and I love a 6am race start; here stage 1 didn’t start until 9:45am by which time I was thinking about having my third breakfast!

The race started with 6 miles and a 3,000 feet climb up to the first checkpoint which is certainly a way to wake-up the legs. A few runners were using poles, but from what I’d seen of the elevation profile, the race wasn’t hilly enough for me to use poles, and I didn’t regret not having poles at all all week and I’d have found them more of a hindrance than a help. My worry about being a bit weak on hills didn’t materialise and I was pleased that I felt pretty strong on the first climb up to the checkpoint. I was using the week to test out kit and nutrition for Spartathlon as I don’t normally get the opportunity to run and race in such hot conditions. The Salomon Speed Bob hat was a revelation at keeping the sun off and I wanted to mirror my planned Spartathlon nutrition as much as I could to test it out in the heat, so was taking Mountain Fuel Energy Fuel, Mountain Fuel Jelly’s, Longhaul pouches and GU gels and this was all what I used throughout the whole week with no dips in energy or stomach issues. 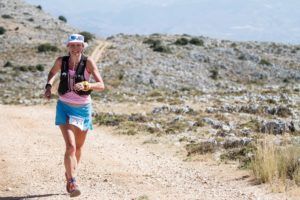 The rest of day 1 was a mix of really runnable undulating trails and downhill and the 23.5 miles flew by. It was one of those perfect running days which felt easy and effortless and you run every step with a huge smile on my face. I arrived at the small town of Alhama de Granada and the end of stage 1 in 3:56 as 1st lady/6th overall (out of 53 starters), but more importantly I felt like I finished with plenty left in the tank as the first few days of multi-day racing are about taking it relatively easy, as the race for me doesn’t start until the long stage. 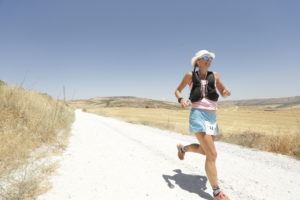 Approaching stage 1 finish and probably thinking about when I’m going to eat next!

The AAUT finish line service is second to none; as soon as you cross the line the volunteers bring a wet towel for you, sit you down with an icy bowl of water for your feet and ply you with fresh fruit and soft drinks. A hot shower and a massage followed….this was multi-day racing at its best, and is why I’ll never return to self-supported multi-day racing!

Day 2 started like every day with breakfast in mine and Rhianon’s cosy tent. After a diet of freeze-dried food on four previous self-supported races, I refused to bring any freeze-dried meals with me on this race. However I knew I needed at least 800 calories per day for breakfast, so concocted up a breakfast of a Mountain Fuel bar, Pasta Mugshot meal, pot of custard and a breakfast drink – it might not have been to everyone’s taste but it gave me a mix of everything I needed to set me up for a day of racing.

I thought I’d lose some time/positions on day 2 as the middle section was quite technical and I’m renowned for being a bit of a fairy on technical terrain. As soon as we set off I felt brilliant which was reassuring that I’d pitched the previous day’s effort just right. I ended up running close to Ed, who’d come third the previous day, for the first half as he would overtake me on the hills and then I’d pass him on the runnable sections – basically if we could combine our best bits we would be unstoppable! 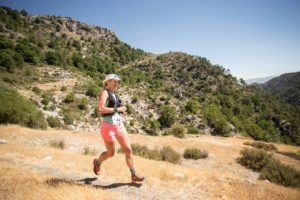 The technical section warranted a bit more concentration, but after the nightmare of the rocks and boulders at GRP last year, this terrain seemed quite tame in comparison, to the point that I even overtook a couple of men, including the speedy Samih who’d finished second yesterday. Then Ed dropped away with a knee injury which would unfortunately see him drop out the race the following day. The final third was more runnable and about 2 miles before the finish I caught up with Manu, who’d won the previous stage, and my immediate thought was ‘I really shouldn’t be catching Manu up!’. I’m very much a head down/music on type of runner who likes her own company, but it was nice to chat to Manu as we pushed each other on into camp and crossed the line together, 29.5 miles in 5:22, 1st lady/joint 2nd overall.

Every evening the results of the day were announced and prizes awarded. On top of my first two stage wins, our team of Rhianon, Scott and myself had taken first team today, it was only day 2 but I’d already won a bottle of wine and two jars of honey and I was wondering how I was going to get everything home! 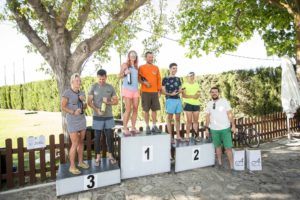 Stage awards rounded off every day – everyone else would go out for dinner after this, Rhianon and I went to bed!

I’d said pre-race that one of the hardest things for me about the race would be adjusting to Spanish eating times as the Spanish eat later than my normal bed time! Fortunately the restaurant in the village of Játar must have felt sorry for us/wanted to humour us, and Eric, the wonderful Race Director, made sure Rhianon and I got food even though it was probably the only time the restaurant has ever served food at 5pm, but it meant we could be tucked up in bed well before 9pm!

On paper day 3 looked like it was going to be a fast runnable day and it didn’t disappoint; with one of my favourite house playlists blasting out I literally beamed my way around 24 miles of gorgeous trails. The first 10k was ridiculously fast for day 3 of a 5 day race, and I did worry that my legs might not forgive me for this later, however my legs held up really well for the whole week and never have I been so grateful for all the weighted hiking Ian gets me to do – my legs might never be able to fit into a pair of skinny jeans but they’ll allow me to hammer out some hard fast downhills!

I’d put the gpx files on my Garmin beforehand, and whilst the course was superbly marked, for someone as navigationally challenged as myself, it gave me reassurance that I was on track and I could switch off a bit. In fact over the entire almost 145 miles of racing, I only made two minor navigation errors, one at the end of day 3 when I missed a turn and ended up in the middle of a river and the other at the start of day 4 where I followed some other runners, but each time got back on track quickly as my watch alerted me I had gone off course.

I felt this had been a good day of running, but it was only when I got to the end and saw just Manu and Chris ahead of me that I realised I’d had a really good day and finished 1st lady/3rd overall in 3:51. I knew I’d been holding 1st lady position in the rankings all week, but I’d also been sneaking up the overall rankings and discovered I was now in 2nd place overall, however Chris and Samih were only minutes behind me, and I know that the long day is when everything can change in the standings and is often when races are won or lost. 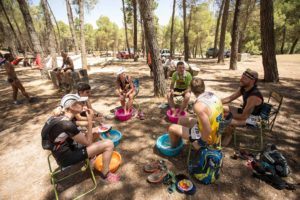 Day 3 ended with a paella meal at camp, once I’d got over the shock of dinner being served at 7:30pm, I made sure I was first in line at 7:25pm….even after 24 miles of racing I’ll still race anyone to the front of the food queue!

Sarah Sawyer
I’m Sarah, a Pilates teacher and Running Coach from Brighton, England. I run everything from parkrun to 100+ mile ultra marathons, and everything in-between. I run on trails, in the mountains, across deserts, on roads and around the track….basically I just love running!
Previous Post
AAUT Pre-race. It Began in a Hotel in Loja.
Next Post
AAUT Days 4-5. Getting my Race Face on.