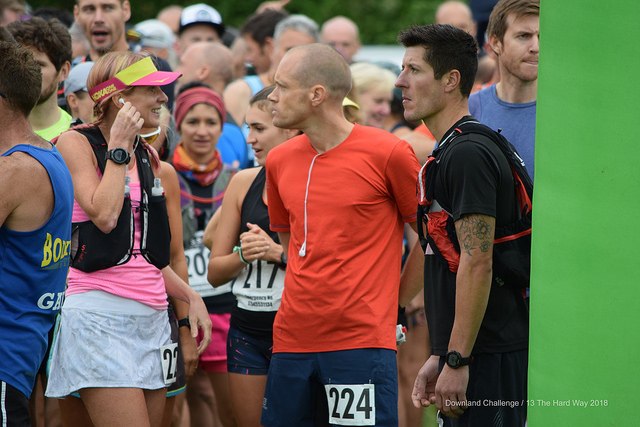 Since I crossed the finish line in Bhutan at the start of June, I’d consciously made the decision not to enter any races between then and GRP. I actually prefer training to racing, and I made the mistake last year in the build-up to the CCC to run a few races that had no bearing at all on my CCC race, so this year I was totally focused on my end goal of GRP.

However, the weekend before GRP I had a 13 mile/1,500-2,000 feet run on my training plan, and I knew Sussex Trail Events ran their 13 ‘The Hard Way’ half marathon that weekend. I checked out someone’s Strava profile from last year and saw it was just under 14 miles and 1,800 feet so it ticked both boxes. I also checked with Ian that I was ok to run it, and I was, with the caveat I didn’t go too crazy or push too hard, especially on the downhills.

So I put late entries in for me and Tom, and then discovered half the running friends I seem to know in the south of England were going to be running it or the full marathon (Downland Challenge) which sets off at the same time and place. After spending most of this summer running up and down mountains with Tom, it was lovely to be a bit more sociable and catch up with lots of friends pre-race. As with all STE events, there’s always a good turnout and there were about 300 runners split between the half and the full option.

I knew a lot of the course which takes in one of my favourite stretches of the South Downs Way, from before Ditchling Beacon, all the way to Housedean, and then reverse. Before heading onto the SDW, the race starts with a short steep climb (about 400 feet over half a mile), but as my last two weekends of training has consisted of Snowdon reps and then Pen y Fan reps, it felt like it was over and done with pretty quickly. And then from there, you head eastwards along the SDW – this is home territory for me and I can run this part of the SDW with my eyes closed.

I’d had a really good training block for GRP, but as with training for any mountain ultra, your training has to be very specific, so whilst I’ve got pretty good at chugging up mountains, I felt like I hadn’t done much ‘normal’ running for months. However it was reassuring that my running legs still worked, and a quick glance at my Garmin told me that I was comfortably running sub 7:30 mile pace without feeling like I was pushing too hard.

It’s a lovely long, mainly downhill, stretch to Housedean aid station, where the half marathon runners turned round (the marathons runners carry on to Southease before turning round). I didn’t need to stop here as I was carrying a couple of bottles of Mountain Fuel and a Mountain Fuel jelly so turned to head back.

The second half of the race is the harder half, with 3 miles of almost continuous uphill after leaving Housedean, and we were also treated to the inevitable South Downs headwind for the reverse leg. However, the miles were passing quickly, and I’d been holding second place since a mile or so into the race. The out and back nature of the course (and the two races going on) makes for a lovely friendly atmosphere, and there were lots of high fives on the way back as I passed other runners.

The race finishes with the steep downhill back to the start, before turning into the field, where I crossed the finish line in 1:59:30 and 2nd female.

All in all, it was a great morning out, and I’d recommend the half or full option for anyone who wants a good trail race on the Downs. All the hours of hill training have definitely paid off as I felt comfortable throughout, and it was reassuring that even though I’ve been doing a lot of very specific slow mountain training, my legs could still remember how to run a bit faster when I needed them to!

Next stop, the Pyrenees!

Sarah Sawyer
I’m Sarah, a Pilates teacher and Running Coach from Brighton, England. I run everything from parkrun to 100+ mile ultra marathons, and everything in-between. I run on trails, in the mountains, across deserts, on roads and around the track….basically I just love running!
Previous Post
How a Fairy who lives on the South Coast trained for a 123k/7,000m race in the Pyrenees
Next Post
Grand Raid Pyrenees Tour des Cirques 1 – Sarah 0